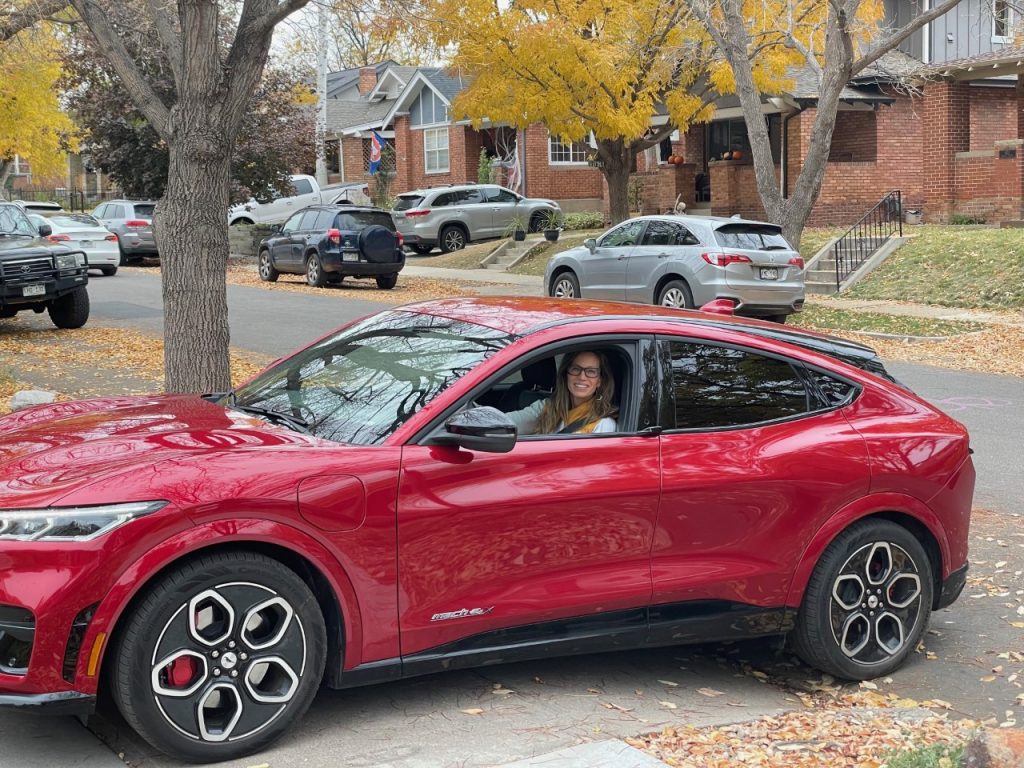 Monica Rosenbluth, Associate Product Portfolio Manager of Xcel Energy’s Electric Vehicle Division, spoke with us about her newest electric vehicle purchase, the Ford Mustang Mach-E GT. She purchased it as soon as it became available last year, and received her car on October 14th. This is her first electric vehicle, but she’s been wanting to go electric for a while.

Monica decided on the Mustang Mach-E because of its fast, sporty nature and functionality as a family car. It’s also eligible for up to $10,000 in combined federal and state tax credits, a huge chunk of savings that manufacturers Tesla and GM cannot redeem anymore due to a vehicle sales cap. However, incentives for these manufacturers are still up for consideration as part of the Build Back Better bill. Switching to electric was part of Monica’s family conscious effort to do better for the environment. The Mach-E emits zero tailpipe emissions as it is driven.

Monica and her family often road trip long distances, their next trip planned for Taos, New Mexico. While she hasn’t yet tested a long drive, she has driven through the mountains frequently and has even driven through a snowstorm. Monica was surprised by how heavy the car felt and how well it handled in the snow. “It exceeded expectations,” she remarked of its driving quality – and she’s not the only one who loves her car. She’s received a lot of positive reactions from fellow drivers and passersby when she parks in public.

cause Monica usually charges at home, she decided to upgrade her charging to Level 2, and recently applied for Xcel Energy’s Home Wiring Rebate. When approved, she’ll get a $500 rebate that will help offset the costs to upgrade her home wiring. She’s also been charging during off- peak hours (9pm – 6am) as part of Xcel Energy’s Optimize Your Charge program, which rewards drivers with a $50 annual credit for participation.

We also spoke with Monica about Xcel’s dealership network. Xcel Energy partners with dealerships across Colorado to educate them about EV programs and rebates in order to help explain EV options to customers. This makes it easier for customers who qualify for Xcel’s EV rebates to get instant cash back on the spot, or apply for the rebate after purchasing an EV at a non-networked dealership. Xcel Energy also helps advertise additional incentives that their networked dealers offer on their website. To find a dealer in their network, go here.