Myth: Exposure to the electromagnetic fields of the battery in an electric vehicle could cause cancer.

Myth BUSTED: The magnetic fields in electric vehicles pose no danger because their electromagnetic field levels are below the recommended standards.

Although studies have linked EMF exposure with serious health issues, the exposure an EV driver would be experiencing is lower than 20% of the value recommended by the International Commission on Non-Ionising Radiation Protection (ICNIRP). These results come from a seven-country, EU-funded study that involved testing of seven different electric cars, one hydrogen-powered car, two petrol-fueled cars and one diesel-fueled car. In the non-electric cars, exposure was measured at around 10% of the recommended safety level. Even the highest values of EMF exposure in the EVs, which would occur when starting the car and being located closest to the battery, do not yield any health concerns. 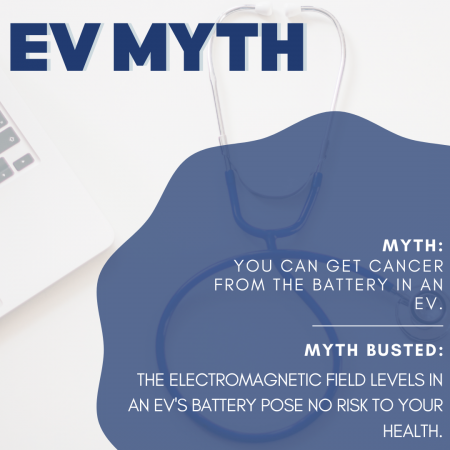